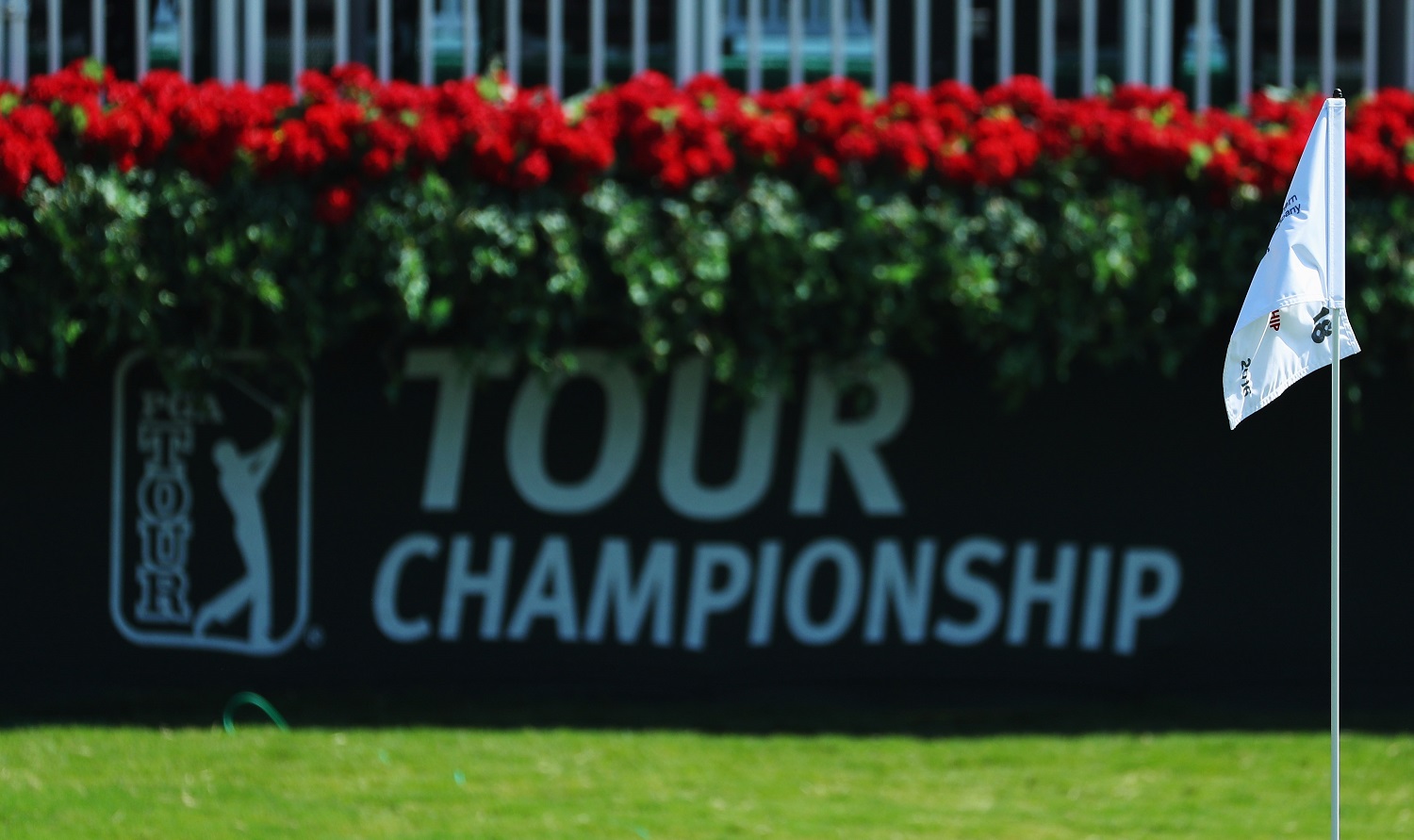 The richest prize in all of golf will be awarded this weekend as the Tour Championship from East Lake Golf Course is competed. The Tour Championship is the final event of the PGA Tour season and brings together 30 of the best golfers of the season while implementing a very unique format.

As usual, we have a full preview and betting picks for the event below, and remember to check out our Golf Betting Picks page for continued coverage of the new PGA Tour season starting next week!

The folks at PointsBet have some fantastic offers available at the moment if you want to have a bet on the Tour Championship. Sign up using PointsBet Promo Code ‘FREE100’ to receive the best signup bonus on offer.

For the second season, the winner of the Tour Championship will also take out the coveted FedEx Cup and walk away with a mammoth $15,000,000 first prize. The tournament will once again utilise the handicap system using the current FedEx Cup standings as the scaling device.

The FedEx Cup playoffs started with the top 125 players in the standings two weeks ago at the Northern Trust. That field was cut to 70 players for the BMW Championship last week and following that tournament, we are now left with just 30 players for the Tour Championship.

The top 30 players in the current FedEx Cup standings will tee it up at the Tour Championship starting on Friday, with a sliding scale of starting handicaps from the top down.

Dustin Johnson, who won the Northern Trust and finished second in the BMW Championship tops the FedEx Cup standings and will start the tournament at 10 under par. He’ll have a two shot advantage over his nearest rival, Jon Rahm, who will start at 8 under par.

See the full results of the two FedEx Cup playoffs events so far as well as the current standings and starting scores for the PGA Tour Championship, highlighted in red below. 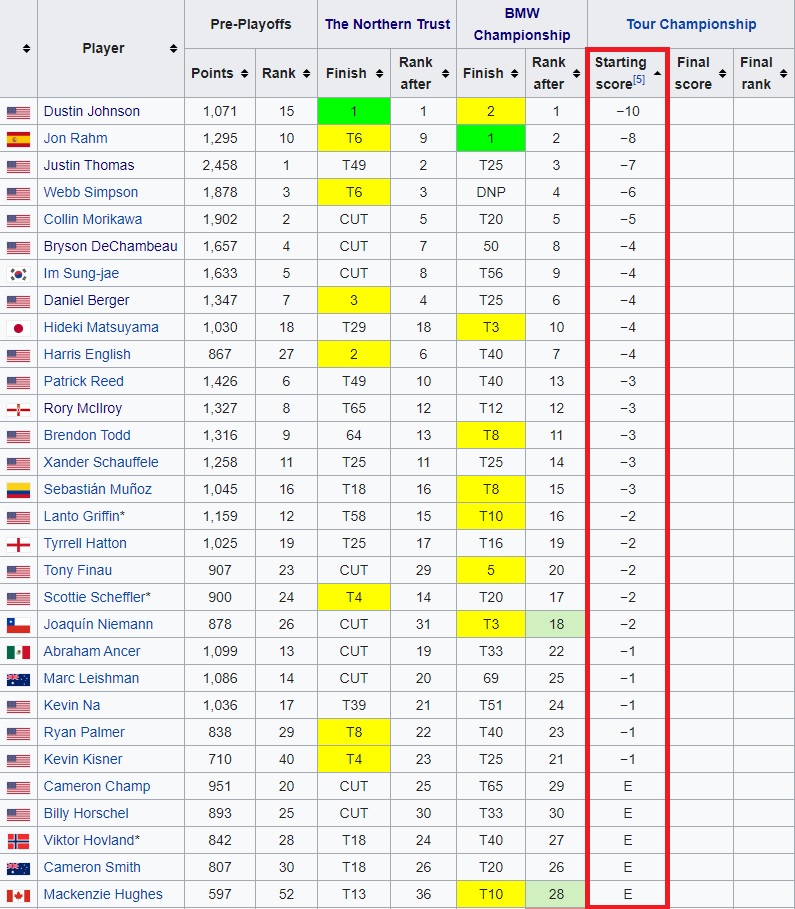 East Lake Golf CLub in Atlanta, georgia has been the host of the Tour Championship since the 2004 season. Since 2004, there has been just two multiple winners of the Tour Championship at East Lake, Tiger Woods and Rory McIlroy. Besides McIlroy, the only other two players who have won at East Lake before who will be teeing it up this Friday are Xander Schauffele and Billy Horschel.

The course plays as a true test for all type of golfers, and while there are no doubt some holes that will suit the longer players, they won’t have a massive advantage like they did at the BMW Championship last week. Zach Johnson holds the course record at East Lake, a 60 he shot in the Tour Championship back in 2007.

Climbed to the top of the World Golf Rankings after his win at the Northern Trust two weeks ago and his performance at the BMW Championship was only affirmation of that ranking. Sunk a clutch putt to make it into the playoff with Jon Rahm, where he ultimately went down to the Spaniard. Is no doubt the most in-form golfer in the world at the moment and starts the tournament with a two shot lead.

One of just two men to beat Dustin Johnson since the PGA Championship almost a month ago. Rahm has also been stellar since the return of the PGA Tour season. He won at the Memorial, finished T6 at the Northern Trust before winning the BMW Championship on the weekend to catapult him into 2nd place in the FedEx Cup standings. Will start the week at -8.

Across the two playoff events so far, Justin Thomas seems to have fallen off some peoples radar but make no mistake, the only three time winner on the PGA Tour this season is still in a very good position to strike. JT led the FedEx Cup standings for a large portion of the year and has been dominant since the season resumed, most recently in the WGC-FedEx, which he won.

Finished T20 last week on a course that didn’t really suit him. Morikawa should feel a lot more comfortable at East Lake Golf Club this week, a course which is more of an all-round test of golf and doesn’t particularly favor the long hitters. Will start five shots behind DJ, a deficit that could potentially be erased with a solid first round.

Hasn’t set the world alight since the return of the PGA Tour season, which is understandable given the birth of his first child is just around the corner. What better way to celebrate it though than winning a third Tour Championship and becoming the first player to win three FedEx Cup trophies. Plays as well as anyone at East Lake, you only need to watch the video above to understand why Rory is a threat here regardless of how many shots he will start behind the leader.

Can’t get enough of the value of Rory McIlroy this weekend. He showed some signs of brilliance at the BMW Championship last week and was right in the mix until a poor fourth round undid all of his good work. He will start the tournament just two shots behind the fifth placed Collin Morikawa and over the course of 72 holes, that is absolutely nothing. Can’t believe his +245 top 5 price tag here given he is the defending champion and 2x Fed Ex Cup Champ.

It’s quite hard to see anyone coming from the clouds to win this week as the lower ranked players are starting the tournament so far behind the likes of DJ and Rahm. However, there are a few guys who we like to climb significantly up the leader board this week.

Kevin Kisner (+15000) Kis finished T4 at the Northern Trust a few weeks ago before placing well at the BMW Championship on a course that was definitely not suited to him. East Lake sets up much better for him and he represents good value to jump into the top 10, sitting just two shots behind to start the tournament.

McKenzie Hughes (+35000) Outside of Rahm and Johnson, Hughes is arguably the best performer of the FedEx Cup playoffs so far. Started the playoffs in 52nd place and finished T13 at the Northern Trust and T10 at the BMW Championship to make the biggest leap into the Tour Championship cut line.