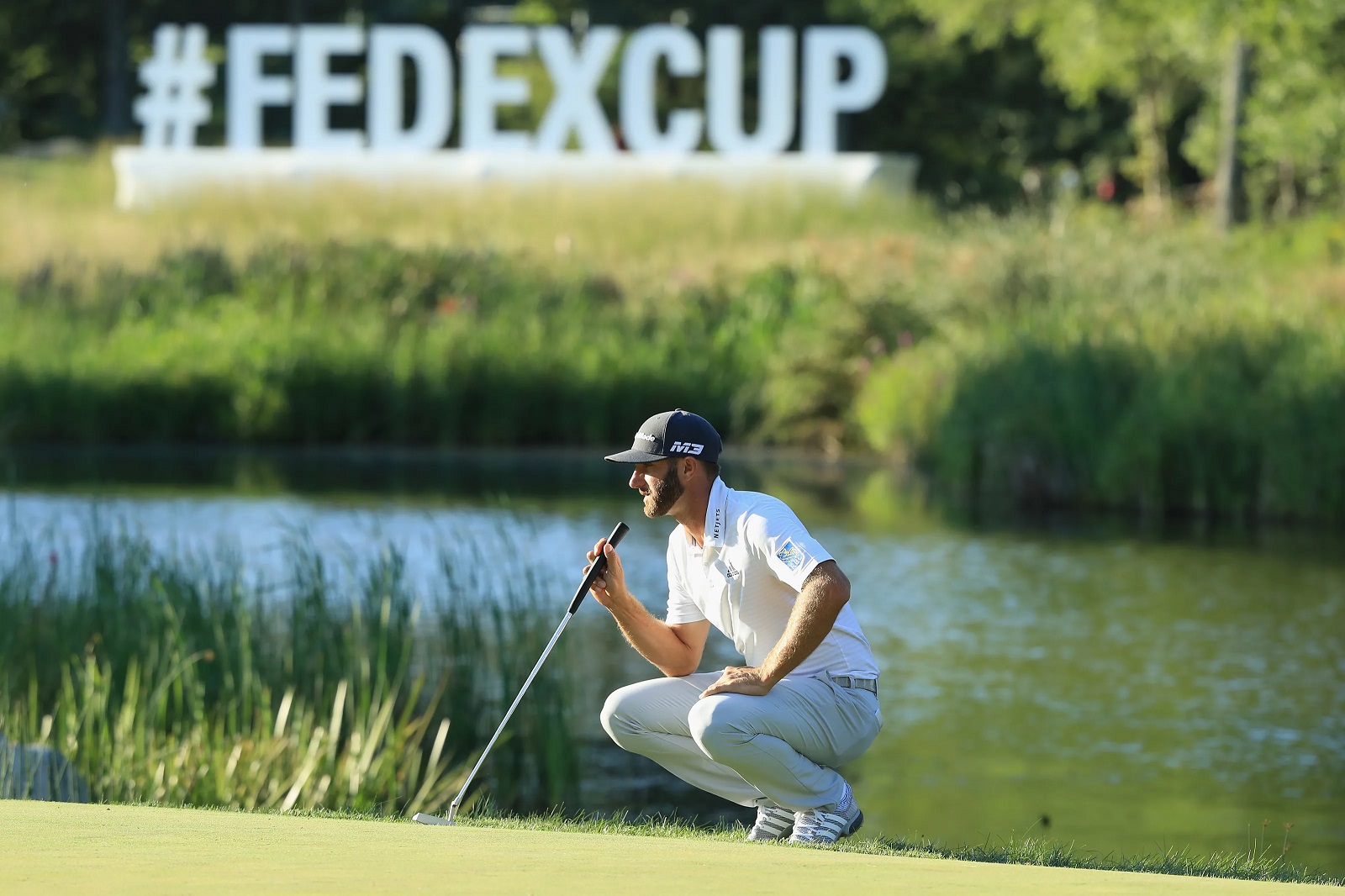 See our full preview and betting picks for the Northern Trust below and remember to continue to check our Golf Betting Picks Page for regular updates throughout the FedEx Cup playoffs and the following U.S. Open. 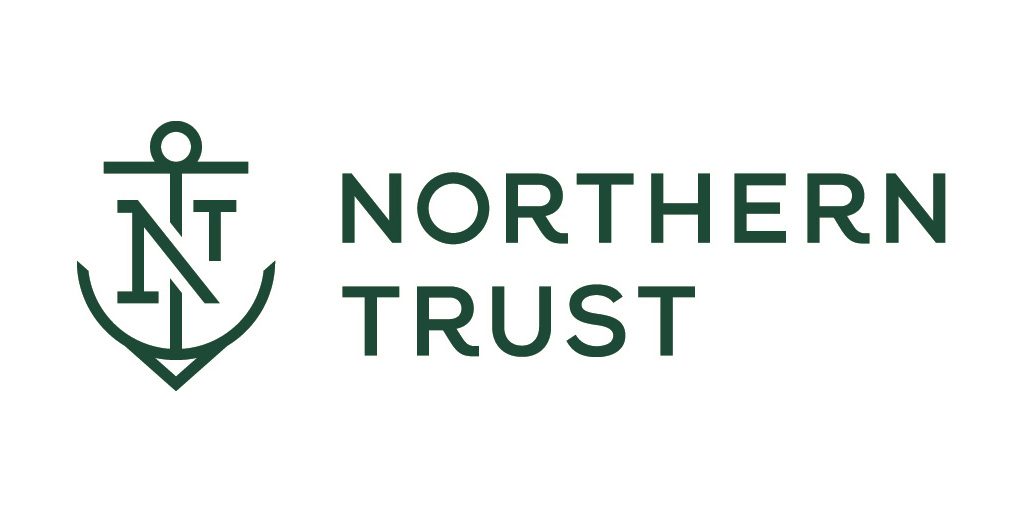 125 of the best players in the world will tee it up and along with winning the tournament, they’ll have another goal, to finish the tournament with a FedEx Cup ranking of 70th or higher to qualify for the BMW Championship next week.

$9,500,000 will be on the line for the next two tournaments and a whopping $15,000,000 up for grabs at the Tour Championship, $10 million going to the winner. While the FedEx Cup playoffs don’t have the prestige of the majors, it’s definitely high on the priority list for players given its monumental purse.

Justin Thomas was the only player to win three times this season and finished atop the FedEx Cup standings, boasting a 556 point lead over his nearest rival. The top five in the standings is rounded out by Collin Morikawa, Webb Simpson, Bryson DeChambeau and Sungjae Im.

There are a bunch of high profile players who are currently in danger and will be desperate to finish high up the leader-board this week and land a spot in the BMW Championship. These players include the likes of Bubba Watson (66), Phil Mickelson (67), Ian Poulter (85), Rickie Fowler (88), Brooks Koepka (97), Jordan Spieth (100), Justin Rose (109) and Shane Lowry (122). 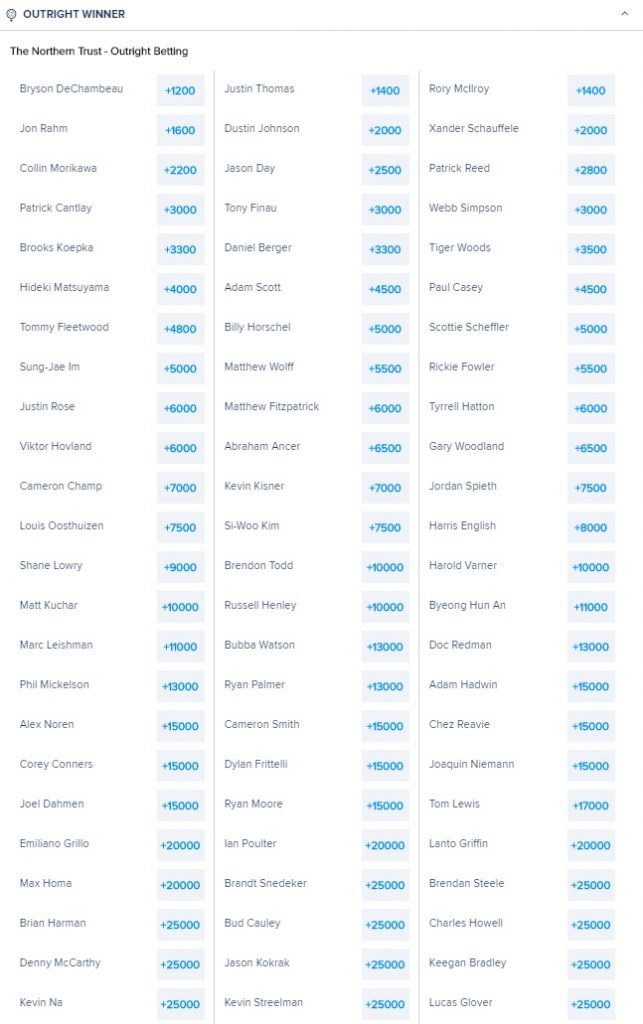 TPC Boston in Norton Mass was the host of another FedEx Cup playoff event in the Dell Technologies Championship. When the playoffs were cut from four events to three, the Dell Technologies was scraped and TPC Boston was added into the rotation of hosts for The Northern Trust. The course was originally designed by Arnold Palmer and opened in 2002 but went through a redesign at the hands of Gill Hanse shortly after.

The course promotes risk reward and scoring is usually at a premium here, with the average winning score being somewhere in the high teens under par. Long hitters will have the advantage if they can keep the ball in play as there are many gettable par-5’s and one driveable par 4.

Strong players from tee-to-green and strong GIR% players who can give themselves plenty of birdie putts will be our main focus this week.

How can you look past JT as the number one player at the Northern Trust this week? The guy is a former winner at TPC Boston, winning the Dell Technologies in 2017 and is on an absolute heater at the moment, racking up four top 10 finishes since the return of the season and a win at the WGC FedEx a few weeks ago. Is now the No.1 ranked player in the world and will be looking to become just the third player to win two FedEx Cup trophies during these playoffs (Tiger Woods, Rory McIlroy).

In my opinion, Day has joined JT and Bryson DeChambeau at the top of the heap in regards to the most in-form players in the world at the moment. The Aussie has racked up top 10 finishes in his last four events, with a T7 at the Workday, T4 at the Memorial, T6 at the WGC event and a strong T4 at the PGA Championship. Sits in 45th place in the FedEx Cup standings heading into this week and will want a strong performance to jump into the top 30.

Bryson is primed to eat this course for breakfast if he has a good week with the driver. At a course where scoring is paramount, the percentage of holes where Bryson has a sand or lob wedge into a green will be a MASSIVE advantage. Is in dominant form at the moment, reeling off five top 10 finishes and a win in seven tournaments since the season resumed. Is also the reigning champion at TPC Boston, having won the 2018 Dell Technologies.

Despite many thinking that Rory has gone off the boil since the season resumed, he has still competed in six tournaments in that time and made the cut in all of them. His highest finished was a T11 at the Travelers Championship, but he has shown real glimpses of brilliance. Needs to put four rounds together to be competitive but TPC Boston could be a great opportunity to do that. He is a former winner here and doesn’t have a lot of pressure to perform as he already sits inside the top 10 in the FedEx Cup standings.

The only major champion of the year so far has been stellar since the season resumed. In that time, he has played in seven tournaments, missing the cut just once and recording two wins, and a 2nd. Is one of the best iron players in the world, which should serve him well on a course where you need to go low to win.

We’ve been riding Jason Day for a few weeks now and that will continue at the Northern Trust as he, once again, has better than even odds to finish inside the Top 20. The guy has been on fire over the past few weeks and seems to finally have control of the back issues that have plagued him over the last few years. Needs a high finish as he currently sits in 45th place and will be looking to jump into the top 30.

Leishman is a little too low in the betting odds to ignore this week. At +14000 to win and a wild +130 to finish inside the top 40, the Aussie is great value. Has played 10 tournaments at TPC Boston, missing the cut just once and racking up seven finishes inside the top 46.

Along the same lines as Leishman, Kuchar is just too consistent to be at +145 to finish inside the top 40 here. In his last five events, Kooch has missed the cut just once and his lowest finishing position is T41. Has played TPC Boston 15 times, making the cut 13 and finishing in the top 40 nine times.