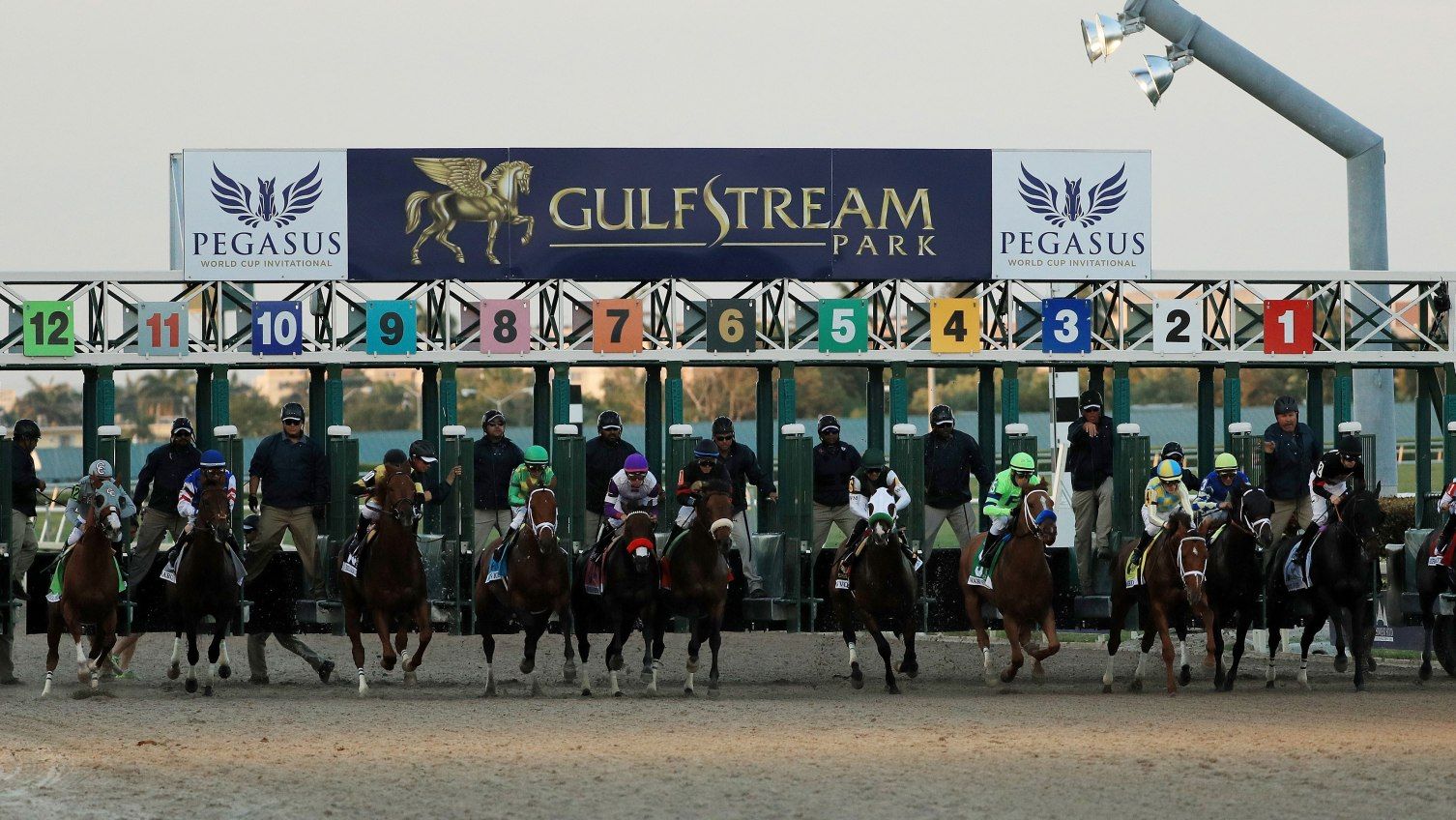 It’s sort of like buying tickets for one of those summer, outdoor music festivals and the headline act, the one most people wanted to see, cancelling at the last minute. That’s what the 2020 Pegasus World Cup feels like after the top two contenders, OMAHA BEACH and SPUN TO RUN backed out of the race. OMAHA BEACH fractured his ankle and SPUN TO RUN scratched due to a skin problem.

While their absence is disappointing, it probably makes the fourth running of the Pegasus World Cup more exciting. Other horses have the stage to showcase their talents, and with no clear-cut favorite, horseplayers could benefit with fatter payouts as longshots become possible players.

Now, a field of 10 is scheduled to hit Gulfstream Park’s main course for a 1 1/8 mile run on the south Florida track. They’ll all try to live up mythical, winged Greek horse Pegasus and the standard set by the first three Champions: ARROGATE, who set the course record in the inaugural Pegasus race, 2018 Horse of the year GUN RUNNER, and last year’s CITY OF LIGHT, the second leading money winner for the 2019.

Let’s look at some of the top contenders to add their name to the champions’ list and wear the Pegasus Crown.

Uber trainer, Bob Baffert’s MUCHO GUSTO is likely to step into favorite status. The four-year-old son of MUCHO MACHO MAN has 10 lifetime races, winning five of his starts with two seconds and two thirds. MUCHO GUSTO has the right running style for Gulfstream Park. He likes to be on or near the lead at a track where speed can hold up from the start to finish.

MUCHO GUSTO hasn’t raced since September 29th when he finished fourth of 10 in the Oklahoma Derby. He’s failed to win his last three efforts, which is concerning. MUCHO GUSTO tends to fade late when pressured by other fast horses. He won’t be alone on the lead today as at least three others will likely pressure the stand-in favorite.

Although MUCHO GUSTO is likely to finish in the top three, his recent record of tiring late makes him vulnerable and a candidate to fade at the top of the ticket.

The second choice among the betting public could be HIGHER POWER. The five-year-old has been sidelined since taking home the bronze in the Breeders’ Cup Classic at Santa Anita Racetrack on November 2nd. Third seems to be his finish of choice as he’s filled in the backend of trifectas six times in his 15 efforts. Although, he does have five wins on his resume as well.

HIGHER POWER likes to start closer to the middle to back of the pack than the front, which can make a trip to the finish line more difficult. He can be blocked by horses in his path, need to weave in and out of traffic as other horses tire, and must pass frontrunners to score.

HIGHER POWER finished fifth the last time he returned to the track following a rest and then won the next race. He might need a tune up race before being his best. It could be another third-place finish for the John Sadler trainee.

Jockey Jose Ortiz will ride TAX for the fifth time. He’s riddden the horse after TAX finished 15th of 19 in the 2019 Kentucky Derby. Like to other top contenders, TAX has been in the barn for a while. November 30th was the last time he hit the track with money on the line.

TAX loves to run the Pegasus’ distance of 1 1/8 miles. He has two wins, two seconds and a third in five races. He tends to settle right behind the early leaders and make his move in the stretch. If he can take the lead in the last 1/8 mile, he is unlikely to give it up as he’s closed the show the last three times he took charge late.

TAX is our pick to click and the one most likely to etch his name on the list of Pegasus Champions.

As we mentioned, with and now spectators, the door is opened for a longshot to steal the spotlight. In Gulfstream Park 1 1/8 miles races, horses that are first or second in the opening quarter-mile win at a combined 40%. That’s a strong early speed bias.

BODEXPRESS could be the fastest out of the gates. He’s been the tip of the spear in three consecutive starts. A third-place finish in his last race might not look good on paper as he tired late. However, BODEXPRESS acted up and was uncooperative before the start and used up some much-needed energy.

During the race, he reduced his fractions, running his fastest race for the first ¾ miles. Many times, this can be a sign of a horse rounding into peak shape and bodes well for their next start. BODEXPRESS is highly likely to win the race to the quarter mile marker. If he doesn’t misbehave pre-race, he could benefit from Gulfstream’s speed bias and steal the Pegasus World Cup in wire-to-wire fashion.

Whether it’s a longshot or one of the remaining favorites, the 2020 Pegasus World Cup is sure to be an exciting race, providing horse players an opportunity to cash big tickets with the two marquee names out of the race. 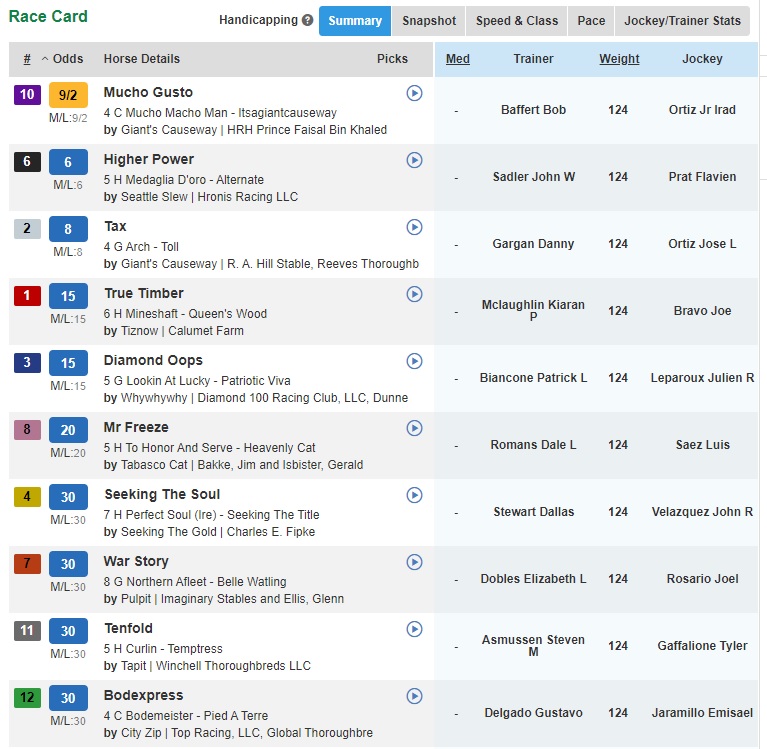 Bet on the 2020 Pegasus World Cup at TVG.com and score yourself a fantastic $200 risk free bet! Simply click the links in this article to be taken directly to TVG.com where you can take advantage of the great promotion!

Place a single horse win bet on the $3M Pegasus World Cup, and if you lose, TVG put up to $200 right back into your account as a wagering credit. TVG is always your trusted one stop destination for legal, online wagering.