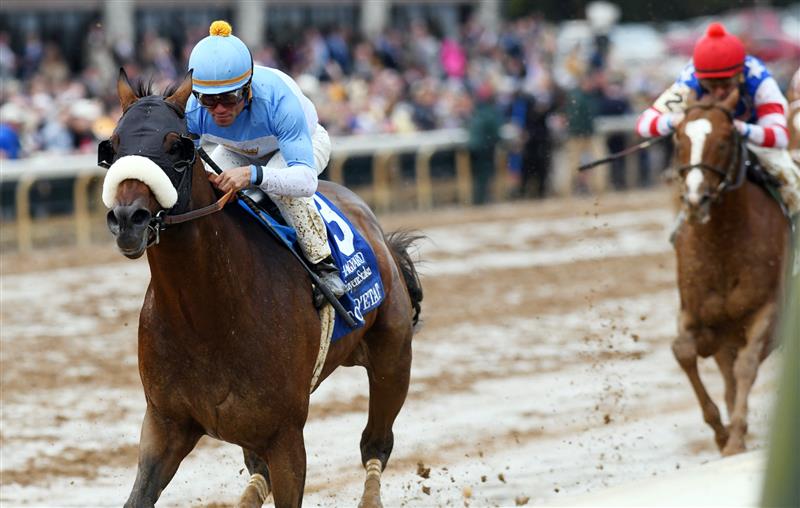 Betting the Oaklawn Mile on a $10 Budget

The Center for Disease Control and Prevention (CDC) is loosening its coronavirus guidelines. In the same vein, President Donald Trump is set to announce a task-force focused on getting the country back to work.

It’s likely the sports world will begin to reopen their doors in a controlled fashion i.e. no fans in the stands at first and limited to no travel for players. Horse racing tracks should also start to re-open their gates shortly, following the protocols in place at tracks that remained open during the pandemic.

Oaklawn Park is one of the few tracks that continued to run races during the coronavirus crisis. The Hot Springs, Arkansas track is only place in the USA where horseplayers will find big money races this weekend.

Let’s see if we can find a nice exacta in the Mile.

A thick field on 14 horses with run a mile on Oaklawn’s main track for the Oaklawn Mile crown. It’s a two-turn race with the first turn coming almost as soon as the horses leave the gates. The quick left turn gives the inside horses a major advantage. Winning percentages drop the further the horses start from the rail with the post rewarding the one horse with 10 wins in the 54 efforts (19%). On the other end, horses starting eighth and out have won just 4% of the races at the distance.

The lucky red one belongs to longshot SLICK SILVER (PP: 1 ML 30-1). The five-year-old ridden by jockey Christopher Emigh is on a six-race winning streak but don’t be fooled. He hasn’t run a race anywhere near the level of competition he’s facing today. Although he does have early speed and is likely to lead the field out of the first turn, SLICK SILVER needs to run the race of his life to compete for the win over our pair of tier one horses in the field.

The first of which is the morning line favorite TOM’S D’ETAT (PP: 3 ML 3-1). The Albert Stall, Jr. trainee has been tough to beat on a fast track with seven wins, a second and a third in 10 starts. He’s dropping in class after posting the highest, last race speed figure for this crew, which is one of our favorite handicapping angles.

Horseplayers might be concerned that TOM’S D’ETAT hasn’t raced since winning the Grade I, Clark S Stakes at Churchill Downs on November 29th; however, he has four wins and a second the last five time he retuned to the track following a rest.

IMPROBABLE (PP: 14 ML 7/2) is the other standout in this field but will need to overcome the disadvantage of starting way, way outside. Now, he’s had some success at Oaklawn with two seconds by a combined 1 length and a neck in two races.

Trainer Bob Baffert’s horse hasn’t raced since the Breeders’ Cup Dirt Mile on November 2nd but has been training like Rocky running up the 72 stairs at Philadelphia’s Museum of Art. IMPROBABLE has four bullet workouts in his last six training sessions. He should be sharp in his first start off the bench in more than five-months but will need to be super sharp to conquer the far outside post problem.

The rest of the Oaklawn Mile field looks wide open. MR. MONEY (PP: 2 ML 4-1) is the oddsmaker’s third choice. He too hasn’t run since the Breeders’ Cup Dirt Mile, finishing a well beaten seventh out of 10. Unlike IMPROBABLE, his workouts are blah and unlike TOM’S D’ETAT, he’s failed to win in his last two first starts following a layoff. In fact, MR. MONEY was away from the track for a similar time last year and got smoked in the Grade II, Risen Star Stakes at Fair Grounds in his first start off the sidelines. At his best, MR. MONEY has a shot to win, but his history suggests he won’t be in top form in his first race in more than five-months, maybe next time.

PIONEER SPIRIT (PP: 4 ML 6-1) has a record of success at Oaklawn and at a mile. He has two wins and three thirds in seven races at Oaklawn and hit he board in seven of 10 at a mile. The Robertino Diodoro horse finished third as the public’s post-time favorite in his last start, 1 1/16 mile on Oaklawn slop.

Diodoro bounces back at 29% with beaten favorites and PIONEER SPIRIT won his last mile long trip around the Arkansas track. He’s done his best work on dirt, finishing in-the-money in 20 of 24 races on dirt. Horseplayers might be wise to bump him up the rankings if it rains on Saturday as PIONEER SPIRIT has four wins and three thirds in eight wet races.

Forecasters expect afternoon/early evening rain in Hot Springs on Saturday. The track could be muddy by the expected 5:43 pm EST post time.