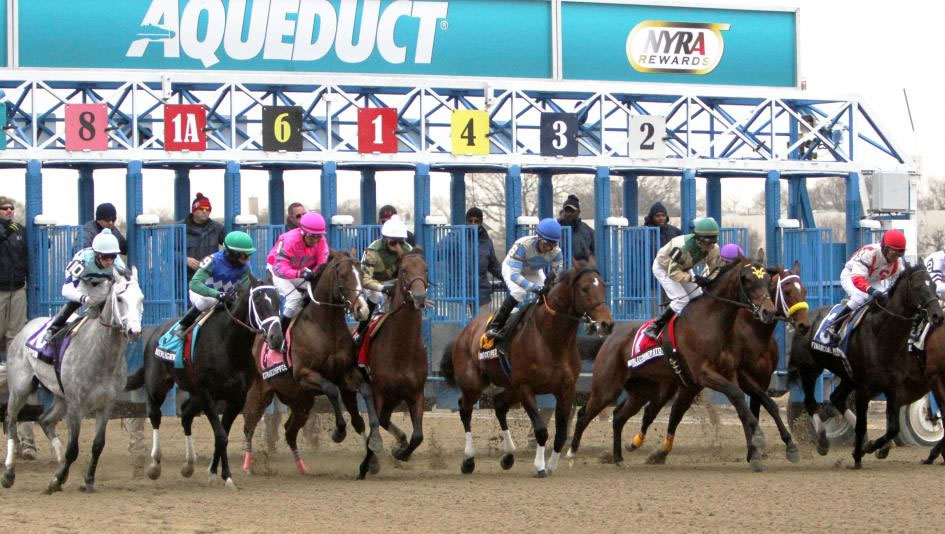 A little word play: what do you think of when you hear the word Gotham? The first things that come to mind are Batman and New York, New York. Although there won’t be a Caped Crusader, horses will be flying around Aqueduct’s main track in Jamaica Queens, New York, New York.

A field of 11 thoroughbreds won’t be chasing criminals, they’ll be after a total of 85 qualifying points for the 2020 Kentucky Derby in the Gotham Stakes. The winner gets the largest haul at 50 and most likely an instant ticket into this year’s Derby field. Every horse with at least 50 points has qualified for the KD since moving to the current system in 2013. (Second receives 20, another 10 for third, and five to come home fourth.)

To run down a thief and to be the King of the Gotham Stakes, you’ve got to be fast. Early speed is the key to the 1-mile dirt prize at Aqueduct. He who leads after the first quarter of a mile wins almost one in four races at Gotham’s 1-mile distance. It’s nearly a six in 10 chance that one of the first three to reach the ¼ mile marker first will also hit the finish line first.

So, let’s review past performances to see which Gotham Stakes horses are fastest out of the gate.

CELTIC STRIKER (PP: 1) has pulled the cart in three of his four starts, leading the way from start to finish in two. He’s making the handicapper’s classic third start after a layoff, which is a 26% winner for trainer Raymond Handal.

That looks good on your internet screen, but those starts were against lesser competition than he’ll face today. The one time he ran at Aqueduct against other Kentucky Derby contenders, he finished a well beaten fourth, 15 long lengths behind the winner, INDEPENDENCE HALL. Perhaps that’s why he has 30-1 morning line odds.

WAR STOPPER (PP: 3 ML 5-1) started his career bumbling his way around turf courses, hopelessly finishing seventh and eighth in his first two efforts. Trainer Rudy Rodriguez flipped him to dirt, but he bobbled at the start and came home fifth. However, horseplayers saw something in his first dirt go and bet him down to 2-1 odds in his second try on the new surface. BANG! Out of the gate clean, winning wire-to-wire at an Aqueduct dirt mile.

We like the run and style. It’s the competition that’s uncertain since he ran against five others seeking their first win. If WAR STOPPER can run a similar race, he can contend for the 50.

MISCHEVIOUS ALEX (PP: 6 ML 3-1) is the” somebody has to be the favorite” favorite. He’s torn up the track and the competition in his last two starts, 7 and 9 ¾ lengths ahead of the next closest horse. He won his last race on February 1st, his first run since November 5, 2019. He didn’t give it his all as the jockey spared him the whip and hand rode him to the finish line despite playing bumper cars at the start.

We really like his last race, winning effort at Gulfstream Park and expect MISCHEVIOUS ALEX to show more in race number two off the bench.

UNTITLED (PP: 10 ML 4-1) started his career like the second coming off Secretariat, running a triple-digit speed figure and smoking a field 12 by 17 lengths. It must have tired him out as he took the next six-weeks off. He hasn’t been the same since, losing by 7 ¼ to MISCHEVIOUS ALEX and fading in an Optional Claiming race. He’s taking a big step in class today. If UNTITLED can run back to his debut, then he’ll be dangerous, but fading on slower times in his last is not encouraging.

Total Sports Plays sees a pair of the speed horses factoring into the Gotham Stakes order of finish. We like MISCHEVIOUS ALEX to earn the 50 Kentucky Derby points and hit the tape first. We are also going to include two horses that stalk the leaders in our selections.

SIXTO (PP: 7 ML 8-1) won his only race on January 30th, making an impressive power move late in the race. He tailed the two leaders until the stretch and then turned on the afterburners. He was 2 lengths behind with a sixteenth of a mile to go and finished 1 ¾ lengths ahead at the line. Many times, horses improve in their second start, sometimes by a lot. If he’s any better in round two, SIXTO could track down the frontrunners late.

MONTAUK TRAFFIC (PP: 8 ML 6-1) has two trips around Aqueduct’s oval and two easy wins after bombing out on Laurel Park slop in his debut. The Linda Rice trainee did something that should catch the attention of all horseplayers. He cut his ½ mile, ¾ mile, and final time by about two-seconds compared to his previous race. Those under the hood numbers usually point to a horse in tip top shape and bode well for the next race as well.

Because there isn’t standout in this field, we are going to go with a four-horse exacta box, WAR STOPPER (#3), MISCHEVIOUS ALEX (#6), SIXTO (#7) and MONTAUK TRAFFIC (#8).