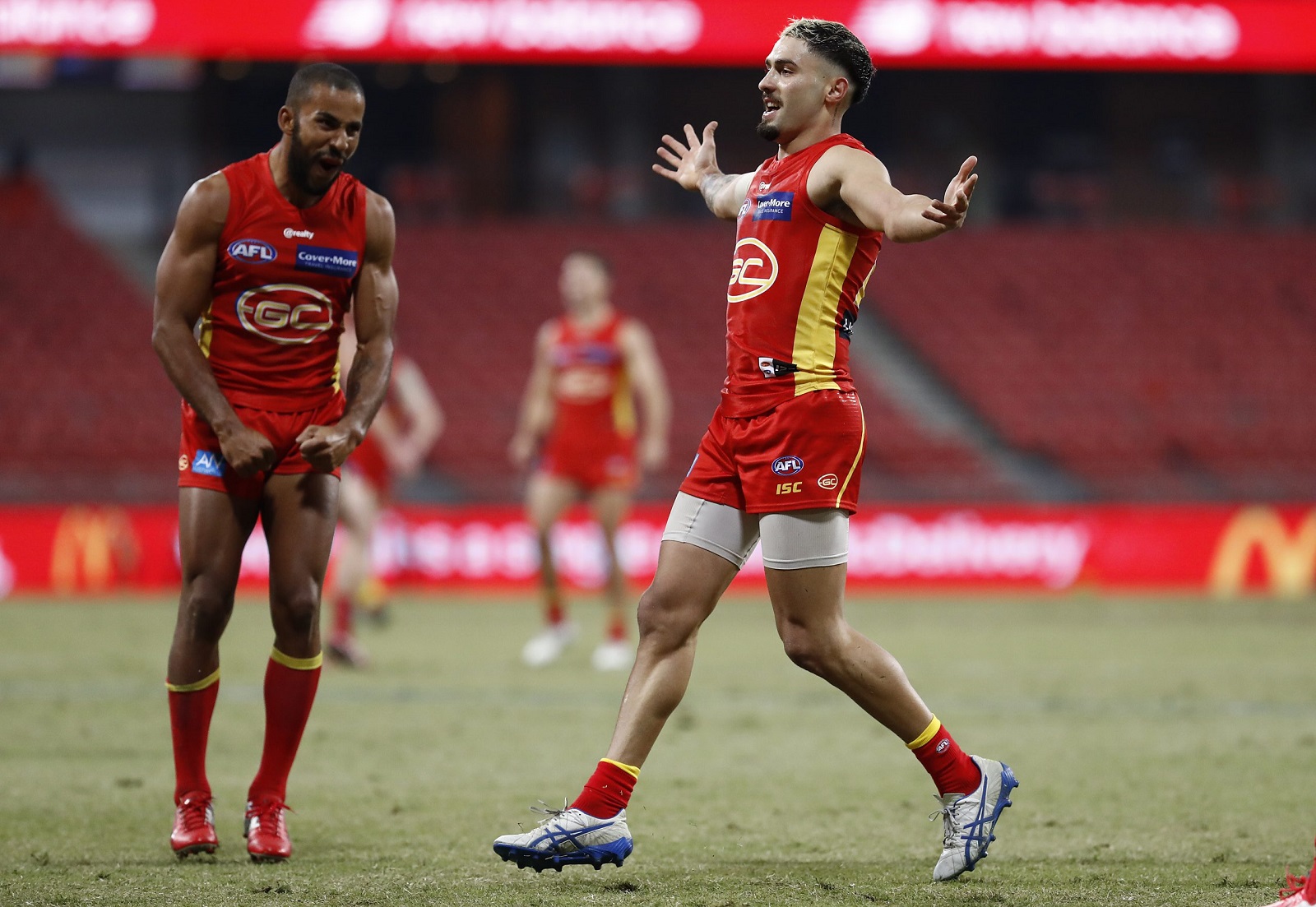 The Australian Football League (AFL) continues this weekend with Round 7. The competition could hardly be any close after a month and a half of footy in what will be a season we will all never forget. Check out our best bets for all Round 7 matches below and good luck to everyone following!

What a cracking game we have on our hands to kick off Round 7. The Cats are coming off a huge win last week against the Lions, which reminded everyone just how dangerous they can be when they get going. Patty Dangerfield was at his brilliant best with 26 touches to lead the Cats to their fourth win of the season and propel them into second on the ladder.
The Magpies also had a great win of their own in Round 6. They were dominant for all four quarters against the Hawks to record a 32 point win in a low scoring affair. Brody Mihocek was elite up forward with a career-best four goal haul, while Adam Treloar dominated the midfield with a game-high 35 disposals. That win was their third of the season and lifted them into fifth on the ladder.
This is a brilliant way to start the round with two of the league’s best clubs going toe to toe. Both teams were fantastic last weekend and that’s made it incredibly hard to find a winner here. On a neutral surface, we expect both teams to have a chance at winning in a topsy-turvy type match.

The Bombers are flying at the moment and their fans are getting very, very excited. Last weekend they took care of a determined Kangaroos outfit to move to 4-1 on the season and into fourth on the ladder with a game in hand. On a sour note, gun midfielder Dylan Shiel was unsuccessful in his tribunal appeal and will miss the next two games through suspension.
The Bulldogs came into their clash against the Blues last weekend in red-hot form having won each of their three prior matches, however, you wouldn’t have picked it by the way they played. They were dominated from start to finish and have now slipped to 3-3 on the season.
This is another match that’s hard to pick a winner, so we’ll be playing some alternative markets. Both clubs love to move the ball fast and play an attacking brand of football, meaning there should be plenty of goals in this one. We love this match to eclipse the 125.5 point total at DraftKings.

The Giants took on the ladder-leading Power last time out but were no match for them when the whips were cracking in the last quarter. The Giants are clearly a quality side but their inconsistency continues to haunt them.
The Lions were dealt a reality check when they were outgunned by the Cats in the prime time slot last weekend. Interestingly, the Lions are now 4-0 at home and 0-2 on the road this season.
It’s certainly an interesting matchup here between two clubs that are expected to be thereabouts at the business end of the season. The Lions have been comfortably beaten in both of their away matches this season but the Giants have arguably been even more inconsistent. It could realistically go either way and we wouldn’t be surprised, but we see the Lions as slight overs in a low bet game here.

The Swans played a big part in what was one of the ugliest matches you’ll ever see when they took on the Tigers last weekend. Despite kicking just three goals for the entire match, the Swans lost but only eight points in an absolute slog fest. Coach John Longmire has been heavily criticised in the aftermath for his negative style of play – and for good reason.
On the other end of the spectrum, Stuart Dew’s Suns are playing arguably the most exciting brand of football of any team at the moment. They take the game on at every opportunity and with moderate success so far. They’re 3-3 on the season which they’d be very happy with internally.
These two clubs play completely different brands of football which should make for an interesting affair this weekend. You know what you’re getting from the Suns week in and week out, so they’re the safer play here. As long as they make the most of the ton of chances they’ll get inside 50, then they should be able to negotiate the win here.

The Tigers were the far better team in their matchup with the Swans last weekend but only came away with an eight point win. Coach Damien Hardwick jokingly stated post-game that there were 75,000 people in the Tigers forward 50; such was the defensive focus of the Swans.
North Melbourne were brave in their meeting with the red-hot Bombers last weekend, but fell away in the last quarter to lose by 14 points. The Kangaroos have now lost four on the spin after starting the season at 2-0.
Neither of these clubs are in fantastic form and the -9.5 spread for the Tigers is about right. Instead, we’ll be looking to play the unders here as neither side has been setting the world on fire in front of goal this season. Expect the Kangaroos to make this a grind of a game and for the Tigers to be made to earn the four points.

The Blues put in the performance of the round and arguably the season last weekend when they dispatched the Bulldogs by 52 points. Their forward pressure was enormous in setting up easy shots a goal, which helped them break the 100-point barrier for the first time in a couple of seasons.
Likewise, the Power were excellent in Round 6 when they took care of the Giants. It was a real arm-wrestle up until three quarter time before the Power flexed their muscles in the fourth. Port Adelaide now sit one game clear at the top of the ladder with a healthy percentage.
This is a nice game to kick off the three game slate on Saturday night/Sunday morning and it should be easy on the eye. Both clubs have put up plenty of points on the board in recent weeks, so betting the overs is a decent way to go. However, we’re even keener on backing the Power to cover the spread and continue their impressive start to the season.

The Hawks were arguably the worst performing team in Round 6 and the aftermath has left a lot of questions around their contention in 2020. For the second straight week the Hawks have been beaten around the contest and failed to hit targets when they’ve had time and space – something you normally wouldn’t associate with Hawthorn.
The Demons were finally able to record win #2 on the season when they defeated the Rowell-less Suns last weekend. Christian Petracca was awesome again with 25 disposals and two goals and would have to be leading their Best & Fairest by a wide margin.
Although the Demons got the chocolates last weekend, they were still far from convincing. Meanwhile, the Hawks are struggling for form but we have seen them produce great performances without any warning. All things considered, we’re expecting a close game with plenty of lead changes throughout.

The Dockers looked on their way to yet another loss this season when they trailed the Saints by six goals at quarter time, although what came next was nothing short of amazing. They rallied back hard in quarters two and three before icing the contest with a goal with one minute left in the game.
The Eagles have now strung together back to back wins where they’ve performed more like what we’ve become accustomed to seeing from them. Last weekend they took care of the lowly Crows by 33 points and have now moved to 3-3 on the season as a result.
The Dockers are just 2-4 on the season but they’ve shown plenty of fight in all six games to date, which makes us think this won’t be a straightforward win for the Eagles like many expect. In the shortened quarters, we’re more than happy to play the +15.5 line on the underdog here.

The Crows put up an OK fight against the Eagles last weekend but the sheer gulf in class was obvious from the outset. They ended up losing by 33 points and are now 0-6 on the season and two games clear at the bottom of the ladder.

The Saints looked the goods at about halfway through the second quarter when they were up by 37 points against the Dockers, but it all went downhill from there. They simply couldn’t shift the momentum back to their side and eventually lost by six points in a thoroughly disappointing display. The Saints are now 3-3 on the season and sit just inside the top eight on the ladder.

The final game of the round is one that certainly isn’t the sexiest on paper. The Crows are terrible viewing at the momentum and the Saints are hot and cold at the best of times. In saying that, this is simply a must-win for the Saints and we expect them to do just that. You have to play some pretty ordinary football to lose to the Crows at the moment, so we’re mildly keen on taking the favorites to cover the spread.