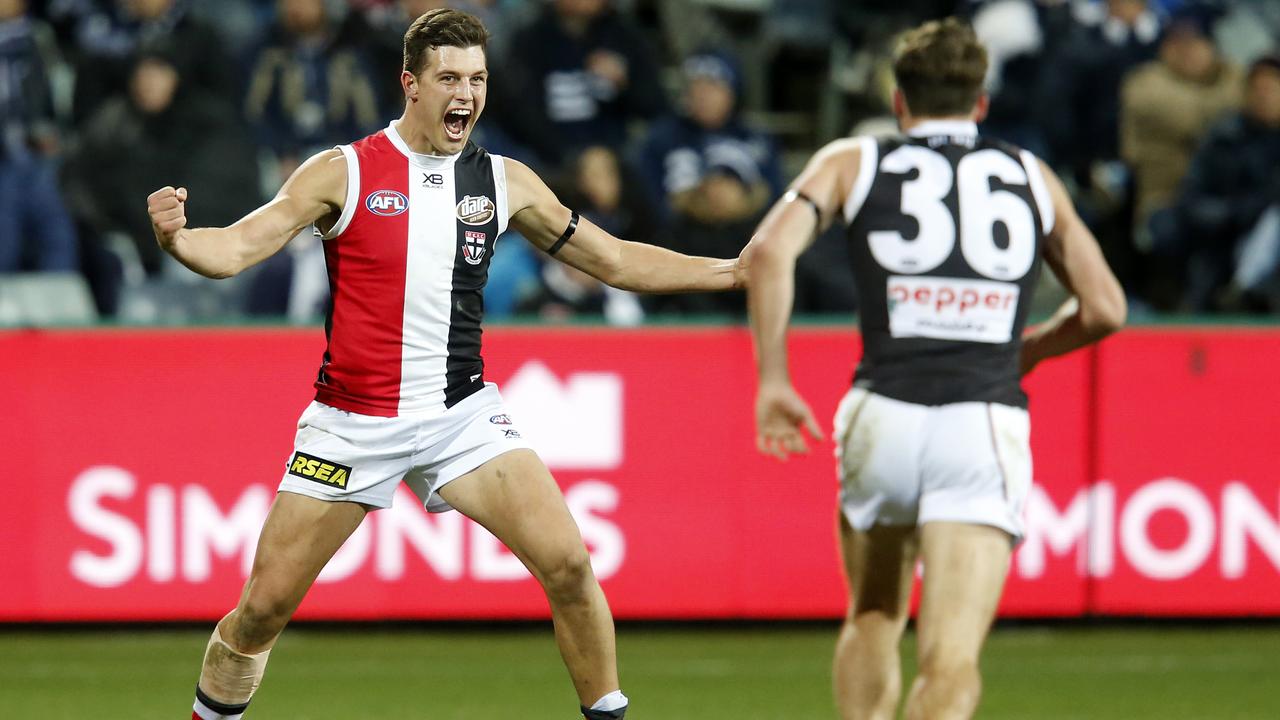 The Australian Football League (AFL) will continue this weekend with Round 5 on the cards. A midweek fixture change due to Covid restrictions would have thrown a few clubs preparations out the window, which should make for an interesting couple of days of footy. Check out our best bets for all Round 5 fixtures below as we look to make it three winning weekends on the spin!

The Saints were the big underdogs against the Tigers last weekend but went on to record a huge win in a bit of statement game. It was their second big win against quality opposition this season and has gotten us all wondering if they’ve actually turned the corner in 2020.

Much like the Saints, Carlton have taken a couple of scalps this season and would be brimming with confidence for the first time in years. They took care of the Bombers in a thriller last weekend and have now evened their season ledger at 2-2.

Both clubs come into this clash with their tails up but we believe it will be the Saints that finish Round 5 with them still erect. They’re at least a season ahead of the Blues in terms of progression and maturity and we see them as the more likely to bring the repeat effort from the last weekend.

The Bombers had every chance to put the Blues away last weekend but just weren’t good enough in the clutch. A 3-0 start to the season would’ve put them in great stead going forward but they’re now staring down the barrel of a 2-2 record as they go up against the flag favourites.

The Magpies also played their part in a thriller last weekend when they went down to the Giants by two points. They had no answer for Toby Greene and will have even more trouble containing opposing forwards for the remaining season now that Jeremy Howe has gone down with a severe knee injury.

The Bombers have had a soft draw to start the season and we think they’ll get found out this week by a quality Magpie outfit. There are rumours star midfielder Steele Sidebottom will be suspended for breaching Covid restrictions, but that doesn’t stop us from liking the Magpies at the line.

The Swans have had a soft draw to start the season and are 2-2 start is about par for them. They were no match for the Bulldogs last weekend and copped an extra blow late in the game when luckless ruckman Sam Naismith went down with another knee injury.

The Eagles showed little against the Power last weekend and need to turn the corner sooner rather than later to avoid letting their season slip away. They have all the talent you could hope for on their list but just haven’t clicked at all thus far.

This is a tricky fixture that’s hard to get a read on to say the least. Neither side brings any sort of form into this weekend, so it really can go either way. We always like to play the Any Other Result in the Wire to Wire market when we suspect a close game and this is no exception.

The Suns bandwagon continues to grow. They were fantastic again last weekend albeit in a narrow win over the Dockers. Matt Rowell posted his third straight best on ground performance in a row and has come into the third line of betting in the Brownlow Medal market.

We all expected the Cats to bounce back from their shock loss to the Blues with a big win over the Demons in Round 5. While they did manage to win, their performance was still far from convincing. The Cats are 2-2 on the season and return to the Cattery this weekend.

All eyes will be on the potential Rowell vs Dangerfield matchup this weekend and for good reason. The young bull faces his toughest test of the season and so does his team. The Suns have stood up to every challenge post-hiatus and we expect this to be no different.

North Melbourne were well held by the Hawks for three quarters before they surged home in the last to be narrowly beaten. It certainly wasn’t the prettiest of games to watch and there’s been a lot of scrutiny about it since. The Kangaroos came out of the blocks flying this season but have been humbled to a 2-2 record.

In contrast to their opponents here, the Bulldogs were horrible in their opening two games of the season but have been fantastic in their last two to even their ledger. They did pick up a couple of injuries against the Giants in Round 4 which was the only negative from their most recent outing.

The Bulldogs are the form side of the two and should be making it three wins on the spin here. They have a huge talent advantage over the Kangaroos and we expect them to get the job done by 3-4 goals as a result.

The Power have been convincing winners in all four of their matches this season and have owned top spot since the outset. Last weekend against the Eagles was a potential danger game and they were tested a couple of times, but managed to answer in emphatic fashion to record another percentage-boosting win.

The Lions have also been building a very nice resume this season and are just a couple of spot behind the Power on the ladder. They did miss out on a chance to boost their percentage last weekend when they kicked 10.23 against the Crows, which was the only knock on a dominant performance.

This shapes up as the match of the round with first taking on third. The Lions get the home ground advantage here but the Power have been red-hot, so that evens it out to a 50/50 in our eyes. We expect a roller coaster of a match with both teams having their fair share of chances to win.

The Dockers and the Crows are the only teams without a win this season with both holding 0-4 records. The Dockers have shown plenty of promise despite missing out on the chocolates in all of their matches, but their quest for a win was made harder with skipper Nat Fyfe going down with a hamstring injury last weekend. For the Crows, well they’ve been terrible in all bar one match and could’ve easily been obliterated by the Lions last weekend had they kicked a bit straighter.

Both clubs desperately need a win to get their season back on track and what an opportunity they have here. The Crows’ task has been made easier with Fyfe set to miss, but the form they’ve shown makes them simply unbackable in our view. We expect the more talented and competitive Dockers side to be too good over four quarters and record a comfortable win at big odds.

The Tigers were poor for the second straight week when they fell to the Saints in Round 4 and questions are starting to be asked of the champs. Too many times their players showed a lack of respect and discipline and they’re now 1-1-2 through four games.

The Demons were freshened after a week off in Round 3 and they put those fresh legs to work late in the fourth quarter against the Cats. They brought back the margin to within a goal but were unable to get over the final hurdle and suffered another disappointing loss.

Neither side brings great form into this matchup so it’s tricky to predict how it’s going to pan out. In saying that, we still expect the Tigers to be the better team this season and for them to start finding some form sooner rather than later. They’re the defending champs for a reason and maybe this round is when they remind us.

The Hawks were able to hang on against North Melbourne in the final game of Round 4 to make it three wins from four outings. The Hawks have now knocked off two of last season’s top four in the Tigers and the Lions, which perhaps some people have swept under the carpet.

The Giants bounced back from a couple of poor displays to record a gritty win over a determined Magpies unit last weekend. They were certainly peppered late in the match but their resilience, particularly from first-gamer Tom Green, was fantastic. The Giants are now 2-2 and have a decent platform to launch from.

This is a great little fixture to cap off what we expect to be an exciting round of footy. Both clubs are coming off narrow wins last start, so a lack of confidence won’t be an issue for either club. We’re going to place our money with the more consistent team so far and back the Hawks in to record a mini-upset. They’ve travelled well to Sydney in the past and we can see them scoring another win this time.