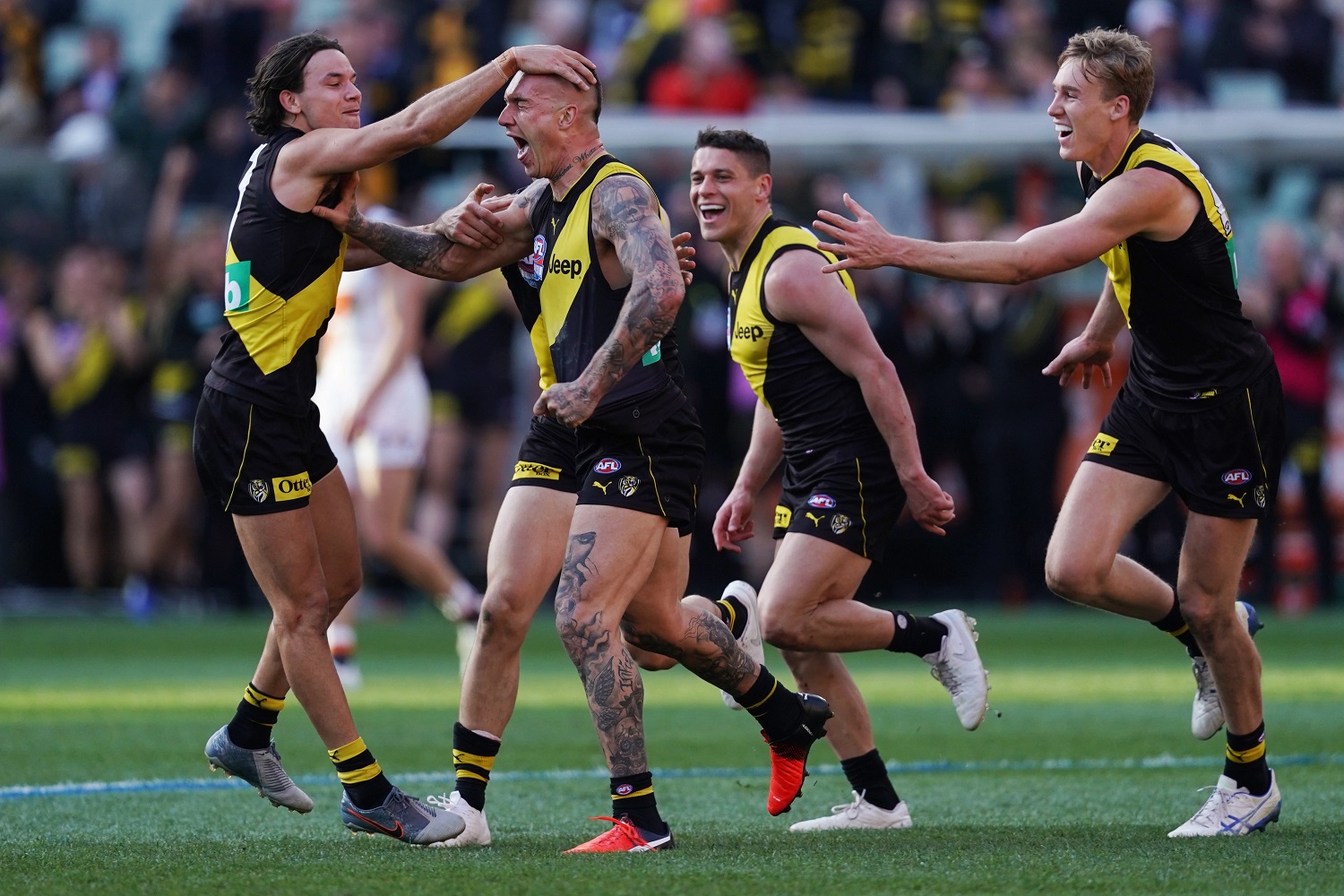 Many elite sporting competitions are beginning to return to play around the globe and we couldn’t be any more excited! One of the sports that you may have gotten a glimpse of just before everything shut down is the Australian Football League (AFL).

Round 1 of 17 in 2020 is in the books and after two months of waiting, Round 2 is finally upon us. Here, we’ll run you through our best betting picks for all nine games of the upcoming round, which kicks off on Thursday morning (ET) with Collingwood taking on Richmond!

Our Round 2 picks in the AFL come direct from Australian Football expert Jake Smit located in the heart of Aussie Rules, Melbourne!

REMEMBER: If you are still new to Aussie Rules Football, make sure you check out our full guide of the game and how to bet on it by clicking here!

What a match we have on our hands to restart the season! The Magpies narrowly missed out on a Grand Final appearance in 2019 which would’ve definitely hurt, but it looks like it motivated them in the off-season because they came out firing in Round 1 this year with a dominant win against the Bulldogs.

The Tigers won the Grand Final in 2019, making it two flags in three years in what is quickly becoming a dynasty. They hit the ground running again in 2020 with an easy win against the Blues in Round 1 to show us they won’t be letting up anytime soon.

This is a huge way to get the season underway again and it’s a match that can simply go either way. The Tigers have had the greater success in recent seasons, but the Magpies have a team and   that can push them all the way. We’re happy to be with the Magpies at a really nice price here.

Another great match in Round 2 between two old rivals. The Cats finished the 2019 regular season on top of the ladder and made a decent run in the finals, but were eventually upended by the Tigers in the Prelim. They returned in 2020 with a decent performance on the road against the Giants, but eventually fell by a comfortable 32 points.

The Hawks had a rare poor year under Coach Alistair Clarkson in 2019 and will be hoping to bounce back in a big way this season. They certainly got off on the right foot with an underdog victory against the Lions in Round 1.

The Cats are the deserving favorites in this matchup considering how these teams fared last season. However, we loved how the Hawks played in Round 1 and believe they could be one of the big improvers this season. We like the Hawks to cause back to back upsets to start the season.

The Lions were the big improvers in 2019 where they finished second on the ladder compared to 15th the year prior. There were queries about whether they’ll be able to back it up this season and their loss in Round 1 didn’t do them any favors.

The Dockers will be hoping for greater success in 2020 and they nearly made the perfect start when they surged home late against the Bombers in Round 1. They ended up falling short however, meaning they need a big performance in Round 2 to avoid starting 0-2.

Both of these clubs will be searching for their first win here and we believe it will be the Lions who achieve that. They’re the far more talented of the two outfits and anything less than a comfortable win would shock here.

The Blues have been a constant down the bottom of the ladder for many years now and it still looks like they’re a while away from that changing. They were really slow starters against the Tigers in Round 1 and although they did cut into the margin, it was still a pretty poor performance.

The Demons went from premiership contenders two years ago to wooden spoon contenders last season; such was the severe drop off in performance. It’s no surprise they’re looking for better results this season, but a 27 point loss to the Eagles in Round 1 wasn’t a great start.

Although they didn’t set the world alight in their first match of the season, we expect the Demons to get the chocolates in Round 2. They come up against a really young Blues outfit that will struggle to win games again in 2020.

It’s do or die for Power Coach Ken Hinkley this season with his underperforming Power needing to make the finals or else it’s sayonara to his head coaching gig. The Power impressed with some strong results this pre-season and continued on into the regular season with a dominant display against the lowly Suns in Round 1, but whether or not they can back it up is the question.

The Crows had another disappointing year in 2019 and it seems like the grass won’t be any greener for them in 2020. Recent footage showing two of their players punching on in an intraclub scratch match tells us all we need to know about how things are going for them at the moment.

The Crows were poor in their Round 1 loss to the Swans and it certainly won’t be any easier for them when they take on their rivals in Round 2. While matches between these clubs are usually a coin toss regardless of ladder position, it’s really hard to see how that will be the case this time around with all that’s going on at Adelaide; we expect a comfortable win for the Power in the Showdown.

The Suns are the perennial strugglers of the competition and won’t be too flash again in 2020. They come into Round 2 on the bottom of the ladder after scoring just 29 points against the Power in Round 1 and it’s hard to see where their first win will come from.

The Eagles are a genuine premiership contender this season and they showed why with a dominant performance against the Demons in Round 1. They have stars scattered all over the field and will be one of the teams to beat when we get to the business end of the competition.

This is one of the less sexy games on this weekend, but it still has a level of interest under these conditions. The Eagles are the much better of the two clubs and will be getting the job done here, however, we like the under points market a touch more than their line. The Suns struggle to score points at the best of times and with the shorter quarters in play we expect them to try and make this a slug fest.

The Giants finally made the leap to the Grand Final in 2019 but it certainly wasn’t a fairy tale ending. They were absolutely demolished by the Tigers to the tune of 89 points in a game they’ll want to forget. Any Grand Final blues were set aside in Round 1 of this season where they were too good for the Cats at home in a great performance.

North Melbourne had a poor 2019 season and it looked like we were getting more of the same in 2020 when they trailed by in Round 1 against the Saints. However, they rallied back in superb fashion to clinch the win at the death and now have something great to build on.

The Kangaroos certainly impressed us in their second half performance against the Saints, but it’ll take a full four quarter effort if they’re to be competitive against the Giants. The Giants are simply the better team and we can see them winning this comfortably.

The Swans finally made the drop down the ladder last season that everyone thought was coming for a long time. Now in rebuild mode, the Swans aren’t expected to win too many games this season, so it was nice to see them get the four points against a fellow struggling side in the Crows in Round 1.

The Bombers scraped into the finals last season but made no impact, so they’ll be looking for better fortunes at the business end of the 2020 season. They got off the mark with a win in Round 1 against the Dockers, but it certainly wasn’t a convincing one. Coach John Worsfold will need a much more consistent performance going forward if the Bombers are to take the next step.

This is an interesting fixture between two clubs where no one really knows where they’re at. In saying that, the Bombers have delivered better results over the past 12 months and they do have the better list in our opinion, so we’ll be backing them in for a narrow win here.

The Saints were predicted by many to be an improving side in 2020 and it certainly looked that way in the first half of their Round 1 match. However, the footy they dished up in the second half would’ve had their loyal fans cringing as they eventually went onto lose a narrow one to a lowly Kangaroos side.

Much like the Saints but even more so, the Bulldogs were predicted to climb the ladder in 2020. They came storming home in the final rounds of the 2019 season to make the finals and many thought that was just the beginning for Luke Beveridge’s men. However, the way they played against the Magpies in Round 1 told us that they still have a long way to go if they’re to reach the heights that many expected.

This is a nice little match to close out an exciting Round 2 of the 2020 AFL season. The Saints will certainly have some support based on the glimpses of excellence they displayed in Round 1, as will the Bulldogs with the way they finished off last season. For us, we’re prepared to give the Bulldogs the edge here, simply because we believe they have the greater upside of the two clubs from their first up performance.