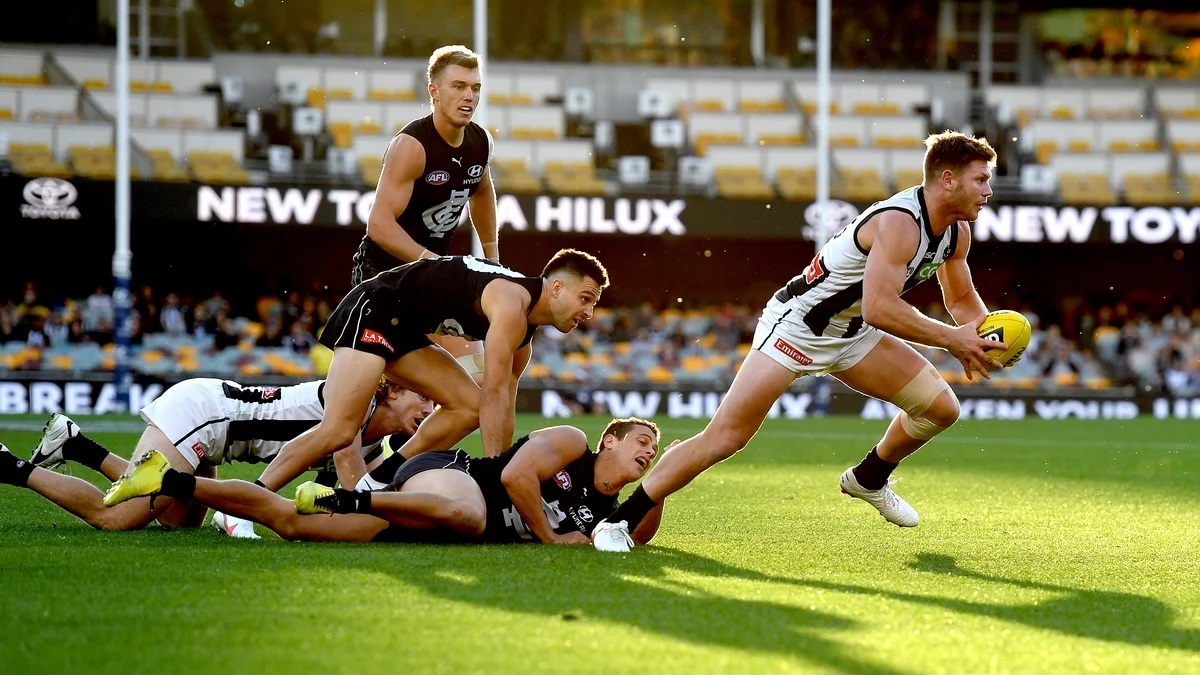 The Australian Football League (AFL) is providing nonstop action at the moment and we’ve made the most of it with plenty of fantastic picks. We now turn our attention to the upcoming Round 16, which kicks off early on Saturday morning (ET) and concludes on Wednesday morning (ET). There are eight matches in the round and you can catch our previews and betting picks for all of them below!

North Melbourne have become arguably just as big a mess as Adelaide this year and will need to put together some much better results in the last couple of games to save face. They were absolutely punished by a lowly Suns unit last time out, which left coach Shaw in a state of shock.

Port Adelaide haven’t quite been at their brilliant best over the past month or so, but they continue to tick over the win column and remain on the top of the ladder as a result. Coach Hinkley ‘swung the axe’ to a degree at selection table by omitting three of his players from their latest match.

We’re expecting an easy win for the Power here, but the spread is just a little bit of a reach considering their recent form. Instead, we’ll be playing the overs in the points market, which seems far too short when you look at the firepower of this Power side. As long as North can chip in with 40 points of their own, we should see the points tally clear the line.

St Kilda had a much-needed bye in Round 15 and will be well placed to attack their remaining three games of the season. They were looking a little lethargic last time out against the Demons when they lost a nail-biter, but are still in a great position to secure a finals berth.

Hawthorn became the laughing stock of the AFL when they lost to the then winless Crows by a comfortable 35 points on the weekend. The Hawks were beaten up around the ball by a team that had been getting bashed all season long, which has left coach Clarkson scratching his head and wondering where to go from here.

We’ve been expecting a response from the Hawks all season and they just haven’t delivered, so it’s fair to say we’ve lost faith in them. On the other hand, the Saints had a freshen up last round and will be desperate to get back on the winners list to stay in touch with the top eight. Saints at the spread looks one of the best plays of the round.

Geelong were another team with the bye in Round 15 and should be able to storm home in their remaining games. Their most recent match was an 11-point win over the Bulldogs, which made it five wins on the trot for the Cats, which is the best current streak in the competition.

Essendon have teased fans all year with patches of brilliance, but it just hasn’t been on a consistent enough basis and they now look destined to miss the top eight. They’ve won just once from their last seven matches and have arguably the toughest run home to finish the regular season.

The writing is on the wall for the Bombers, with their finals aspirations hanging by a thread. Unfortunately, we believe this match will be the straw that breaks the camel’s back. The Cats are simply a much better team and should be coming away from this with a very comfortable win.

The Bulldogs are one of about 4-5 teams vying for the last two spots in the top eight, and they have a decent enough run home to get the job done if they’re good enough. They’ve split their last 10 matches down the middle at 5-5, which just about shows where they’re at this season. Now is the time to finally string some wins together.

The Eagles were able to secure a rare win away from home last start against the Bombers, but it was a performance that still left a lot to be desired. They’re currently sitting in fifth spot on the ladder and will need to up the ante if they’re to clinch a double chance in the finals.

The location of this game is everything. If it was in Perth, then the Eagles would be our clear pick. It isn’t, so we see this as a genuine 50-50. Both teams have it all to play for and we expect it to go down the wire, so the Bulldogs with a 6.5-point head start seem the obvious play.

Melbourne fans were left scratching their heads after their team got put to sleep by an inexperienced Swans outfit that had nothing to gain by winning. The Demons were sitting in eighth with it all to play for and simply weren’t anywhere near good enough.

Fremantle were able to bounce back from their embarrassing performance against the Giants, by pushing the Tigers all the way to the final siren in their recent outing. They weren’t able to get the chocolates, but they certainly didn’t lose any fans with their effort.

This is one of the hardest games to get a read on in Round 16. The Demons still have realistic hopes of playing finals, so they seem the obvious pick here, but the Dockers have proven to be a hard team to play against over the past 5-6 weeks. It should be an interesting battle, but we slightly lean towards the Demons to cover the spread in a low bet game.

After 14 losses, Adelaide were finally after secure a win in 2020, and they did it in style against the Hawks, thumping them by 35 points in front of their home fans. It was their last obvious chance to make sure they didn’t go the full season without a win and they took it with both hands.

GWS were slow starters against a determined Blues outfit last round, but were able to get it rolling in the second half to eventually come away nine point winners. It was a crucial four points that they secured, taking them inside the top eight for the first time in over a month.

The Giants have won two on the spin and are the huge favorites to make it three when they take on the lowly Crows. Although the Crows managed to win last time out, it was against a depleted and disinterested Hawks team that had nothing to play for. Don’t be fooled into thinking the Crows will string wins together – this will be a very easy win for the Giants who will be desperate to retain their spot in the top eight.

Carlton fans were daring to believe that their team could finally break through and secure a finals berth in 2020. Unfortunately, the Blues faithful will have to wait at least another year, as it’s just about an impossible task this year after two losses on the spin. They continue to try hard, but their young squad just haven’t been able to finish off games the way they’ll be able to do after a couple more pre-seasons under their belts.

Sydney surprised us all with a big win over Melbourne in their most recent outing. With seemingly nothing to play for, the Swans came flying out of the blocks and never looked back. Despite the win, the Swans look almost a certainty to finish the season in the bottom four.

Sydney were great last weekend, but it was probably their last chance to win a game this season, as they have a very difficult three games left to play. We’re expecting the improved 2020 version of the Blues to be able to negotiate the win as they look to finish off the season with some momentum.

Brisbane held off a determined Collingwood unit in the Round 15 closer, which made it four wins on the spin. Not only have they been great this year on the field, but the Lions got a big boost off the field this week when the AFL announced that the 2020 Grand Final will be played at their home ground, the Gabba. It could prove to be an added incentive for the Lions as they look to finish in the top 2 to secure some crucial home finals.

Gold Coast have been a much improved side in 2020, but they still have a long way to go before they become a finals team. They were fantastic last time out against North when they won by 63 points, which was their highest score of the season.

The Suns have impressed us all with their ability to stay competitive for the majority of the season, but they’ll simply be outclassed by their crosstown rivals in this one. The Lions haven’t been in the best of form, but their talent is too good to be denied in this matchup. We see a Brisbane win by 1-39 points as the way to attack the final game of the round.