2018-19 Preview
The 2017-18 Celtics went above and beyond what was expected of them in the playoffs without two of their best players in Kyrie Irving and Gordon Hayward. They edged past the Milwaukee Bucks in Round 1 of the playoffs in seven games before disposing of the 76ers in five games in the second round. That set up a conference finals matchup against LeBron James and the Cavaliers where the Celtics put up a fantastic fight to eventually lose at home in game seven.

The Celtics will get Irving and Hayward back this year both of whom have looked decent in the pre-season and they have made limited changes throughout the off-season. Al Horford proved that he is still one of the most versatile big men in the game in the playoffs last season while the progression of Jayson Tatum and Jaylen Brown was off the charts. Tatum in particular looks like he could be a franchise piece for the future and at just 20 years of age should take another big step this season.

With the roster that the Celtics possess and the limited time that they might have together, the Celtics will be disappointed with anything less than a finals appearance. They importantly resigned both Marcus Smart and Aaron Baynes in the off-season who, along with Terry Rozier, Marcus Morris and Semi Ojeleye should give them one of the deepest benches in the league.

In our opinion, Irving, Brown, Hayward, Tatum and Horford is the best starting rotation outside of San Francisco and the Celtics should be dangerous in 2018-19. 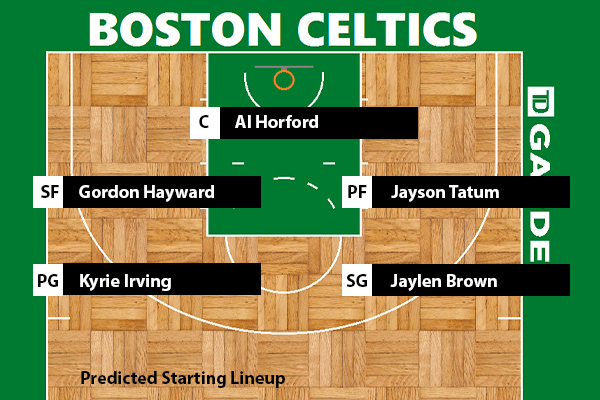 What to Expect?
The one thing that we love about the Celtics this season is the sheer versatility of line-ups at coach Brad Stevens disposal. When needed they can go extra big with Al Horford at the four and Marcus Smart at point guard and on the flip side they can go extra small and shooting heavy with Jayson Tatum and Marcus Morris at the four and five. Both Terry Rozier and Kyrie Irving, who are above average shooters will be able to play more time off the ball as spot up shooters while Jayson Tatum will get more one on one matchups than he can dream of when Gordon Hayward and Al Horford are on the floor.

The Celtics are so young and primed to be excellent in the future, but they are also in the enviable position of being a true contender for the title right now. They have a fantastic first round pick courtesy of the Sacramento Kings next off-season and already boast two of the most exciting young prospects in the league in Brown and Tatum. Kyrie Irving will likely opt out of his contract at the end of this season but whether he stays or not, the Celtics are primed to be a juggernaut in the NBA for years to come.

It’s hard to pick the Celtics to win the championship when the current Golden State Warriors squad is still in action, but we think it would be a surprise if the Celtics weren’t facing Steph Curry and co. in the finals. 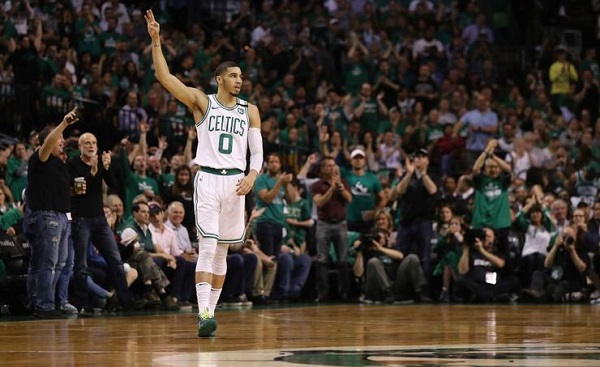 Tatum took a big step in the 2017-18 playoffs and elevated himself to arguably the Celtics most important player on the offensive end. While Kyrie Irving will no doubt handle the ball and create for his teammates on the offensive end, Tatum will be the Celtics go to guy when they need a bucket most. His size, athleticism and creating ability at the three position holds comparisons to that of Kevin Durant and his durability his nothing to complain about either.

Tatum played 80 games in his rookie season and averaged just over 13 points per game, however, in the playoffs he bumped that up to 18.5 points. He was the Celtics first option on offence in the playoffs but will get a lot less attention this season with Irving and Hayward in the line-up.

Whether the Celtics make a deep run or not this season, Jayson Tatum is the key to their success presently and in the future.

Vegas 2018-19 Win Total
The Celts racked up 55 wins last year after Gordon Hayward suffered a season ending injury in the first five minutes of the season. Their current line sits at just 57.5 games, which we think is way too low. We are going to be smashing the overs here.

The Celtics bench is arguably one of the best in the league, which is crucial in the long NBA regular season. We wouldn’t be surprised with a 60-win season from Boston here in what should be a diluted Eastern Conference with the Cavs dropping down.