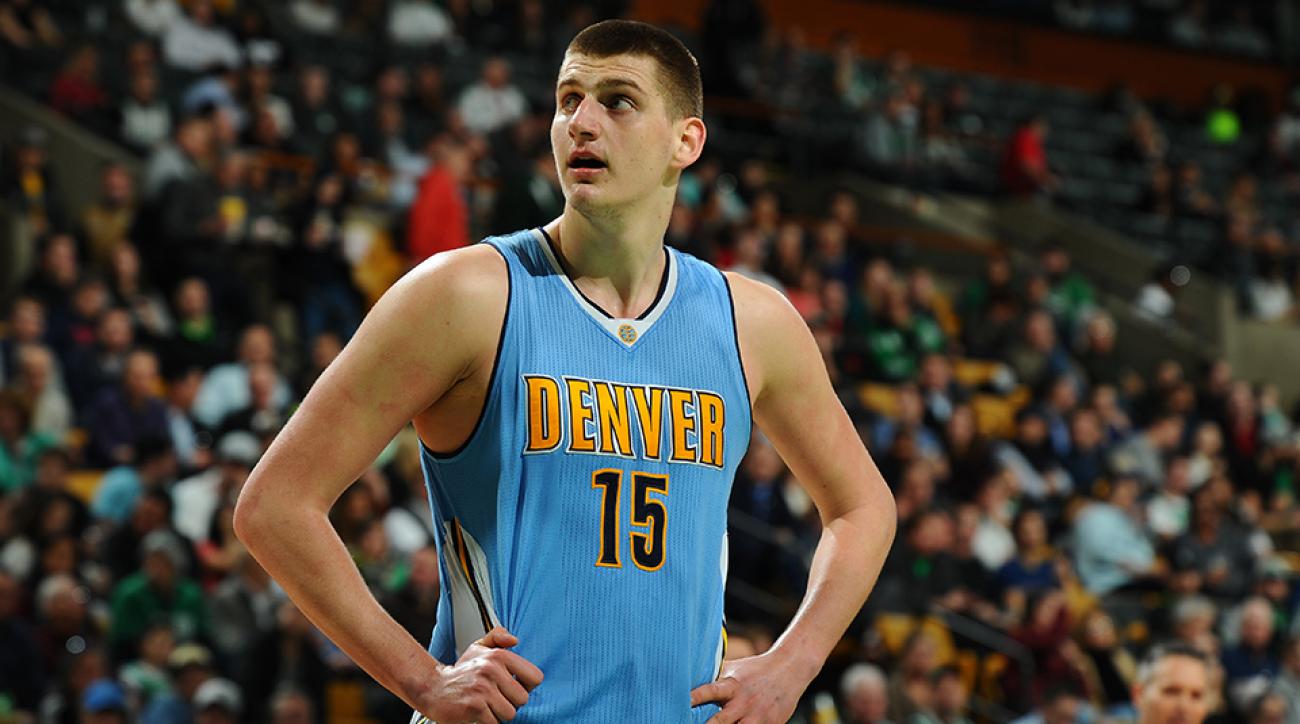 We had a narrow win, but a win nonetheless on Monday with our best NBA Pick of the Day saluting. The Sixers proved a touch too good for the Pelicans at the Smoothie King Center in New Orleans, eventually winning by one point (111-110) on the back of a big performance by new recruit Tobias Harris (29 points, 10 rebounds). We now turn our attention to the small three games slate on Tuesday and look to keep the good time rolling. Good luck to everyone following!

Our best bet from the three games on Tuesday comes from the all Western Conference affair betweek the OKC Thunder and the Denver Nuggets at the Pepsi Center in the Mile High city of Denver. This all important fixture tips off at 10:30pm (Eastern Time) and will feature two of the West’s three best teams this season.

These teams have already played each other twice this season, with the Nuggets winning both by healthy margins. They have a chance to close out the regular season series with a win here. The last time they met was on December 14th in Denver, where the Nuggets came out on top by 11 points (109-98) in a comfortable wire-to-wire victory. Nikola Jokic led the way that night with 24 points, 15 rebounds and nine assists, while Paul George was good for the travelling side with 32 points.

The Thunder come into this off a disappointing and rather surprising home loss to the Kings last time out. They had plenty of chances to steal the victory, but eventually came up short in the clutch. Despite the loss, OKC have won 12 of their last 15 games and look destined for home court advantage in their first round match-up in the playoffs. They’re currently sitting in third spot in the Western Conference standings with an overall record of 38-21, which has them 4.5 games behind the Warriors in first, and 7.5 games ahead of the nine placed Kings. The Thunder have an OK record of 17-13 on the road this season, with one of those losses coming in Denver. 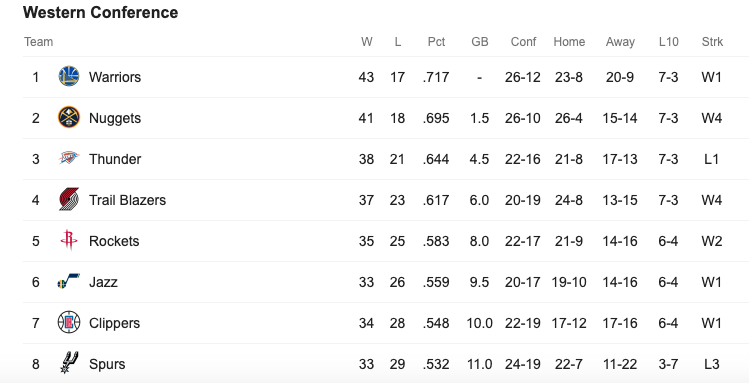 The Nuggets continue to prove the doubters wrong with impressive wins, as they have done all season. They’re coming off a a big 27-point win at home against the Clippers in their last time out, which made it four wins on the spin, three of which have come at home. The Nuggets have put together a really nice 41-18 record on the season, which has them in second position in the Western Conference standings, just 1.5 games behind the Warriors in first. They’ve also been the best home team this season with a dominant 26-4 record.

Pictured below is how we expect the teams to line-up on Tuesday night, as per RotoWire. 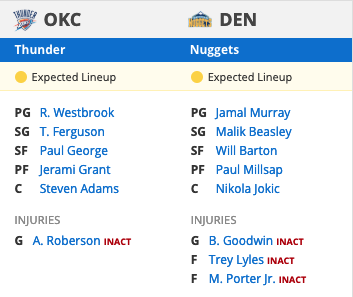 The Nuggets have had the wood over the Thunder this season, which is something we expect to continue on Tuesday night. They match up really well against their opponents here and will have the home-court advantage, which is something they’ve certainly faired well with this season. This one may be a touch closer than their previous two encounters, but we still expect the Nuggets to come out on top, covering the spread in the process.